Update: The code is here https://github.com/farnasirim/max-flow-optimization.

There was this particular weighted matching problem that I needed to solve some time ago. The problem specification is not relevant here but its got only a few more constraints than a normal maximum weighted matching and instead of actually thinking, I decided to reduce the whole thing to min-cost flow, similar to what one would do for a normal max matching.
For my actual usage, everything was fun and games. My C++ implementation would give me the answer almost instantly on a synthesized small input and in a few minutes on my actual data.
Now for some reason, I needed to implement the same thing in Python too. You see where this is going, right?
This is basically my status report while trying to understand why the exact same code Runs 1000s (not kidding) of times slower in Python.

I used the augmenting path algorithm for finding a min-cost flow in the graph. On the very high level, it looks like this:
Your algorithm for the shortest path subtask has to support negative edges (or you can use potential functions to handle those separately). I used D´Esopo-Pape algorithm there.
On my small input, the C++ version takes about 0.1s and the Python version takes about 1000s.
Here’s a part of the Python version:
And the shortest path subroutine:
And I assure you that the C++ version is essentially the same code, only written in C++.


Show me the slow

Well, I would guess that the shortest_paths_from is the suspect here and has the most share in the total running time. Let’s verify that. I wrote this decorator to measure the time a piece of code takes to run:
Let’s skip the cryptic syntax and see the usage:
And you can see the results with:
You can pull off lots of ideas in the decorator, including saving different function params/args (excuse my illiteracy for not knowing which one to use when we’re in the “middle” of passing the values to the function) along with their corresponding running times. (Fun fact: This actually makes sense here. The bipartite graph is super “simple” in the beginning. This causes the shortest path problem to become “harder”, that is, to involve more edges in the residual graph as we send more flow, and this impacts D´Esopo-Pape greatly)
This is pretty handy as you can measure time on a finer grain (than functions) too. For example to measure the time it takes to manipulate the paths and apply the flow inside the while loop in min_cost_flow, we can indent the relevant lines into a local closure, capture the local variables, and measure the time it takes for the closure run:
Pop quiz: Do you see why you should be careful when using this (or any method of measuring time) when functions call each other recursively?
Anyway, Here’s the result in our case (for a VERY small input): 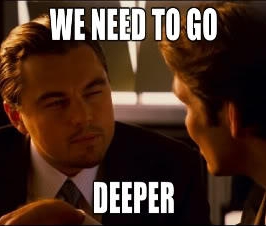 I’ve heard deques are slow:
Well, not really. In hindsight though, this is obvious. Each operation on the queue may be expensive, but their count is way less than the number of times we just check weather or not we can update the shortest path using an edge:
This is proved to be the case when I looked at the number of times this is executed on average and simulated the process with deterministic number of iterations and a few memory accesses:
The running time for this little piece of code is almost equal to the whole min-cost max-flow algorithm program.

To understand what’s happening here, I decided to look at the byte code of the original function:
Here’s the important part:
All I really saw at the first glance was the number of LOAD operations. I’m sure you now agree with a completely unbiased opinion.
Now can we reduce the number of LOADs? Turns out we can. If we start thinking like the compiler and keep an open mind about losing code beauty while accounting for the shortcomings of the actual compiler, we can see that there are a few extra LOADs as the variable u is invariant throughout the inner loop. Therefore we can change this
To this
extracting out the duplicate references.
Let’s see the results:
Unreal! The compiler hasn’t been doing any of these things. That’s about a 2x improvement in performance in the small synthesized test case from the original code (about 1.5 seconds).
On the bigger test case, this improves the running time from ~15 minutes to ~7 minutes.

Unfortunately I did lots more without anything to show for it. Almost everything else that I did (from using c native types to fooling around with how I stored things) resulted in degrading the performance.
I ended up achieving the performance that I was looking for by using another algorithm, but the question of why this (still) runs thousands of times slower than the cpp version remains open for me.
Posted by farnasirim at 8:25 PM 2 comments: